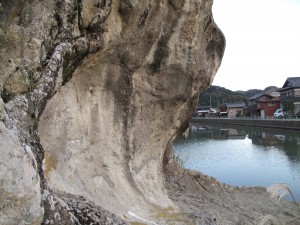 Located in the mouth of the Maruyama River, Kehi is a site showing evidence of ancient trading with the Continent from the relics of unearthed Doutaku (copper bell). Notched rocks showing the traces of marine transgression in the Jomon Period and the marvelous rocks of Elephant Rock and Ebisu Rock are located near the area, which are loved by local citizens. The Tai district, where the Tai Marsh is partly registered as a Ramsar Convention marshland, is known as a model place where local people acted to decrease disaster damages when North Tajima Earthquake ocurred in 1925. 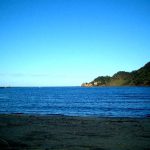 1
Keinohama Beach
A sand beach in the mouth of the Maruyama River. Upland farming is conducted on the beach bank. As shown by the name Kehi, the place shows influence from the Korean Peninsula and people have been lived since ancient times. Tumulus in Tai and the Doutaku unearthed site are historical sites designated by the city. Designated as a cultural property also.
Toyooka Minato Tourist Association
0796-28-3244 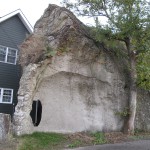 2
Elephant Rock and Ebisu Rock
Notched rocks above sea level, showing that the sea level in the Jomon Period was higher than now. Elephant Rock is a rock shaped like an elephant. Since green tuff is easily eroded, the rock has become the current shape by erosion.
Toyooka Minato Tourist Association
0796-28-3244 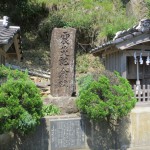 The Kinumaki Shrine is located just across the Minatoohashi Bridge over the Maruyama River. It is the northernmost shrine of the Tajima Five Shrines. Mt. Kinumaki, where the Kinumaki Shrine is built, is designated as a Hyogo Prefectural Natural Monument because beautiful columnar structures like a fold of silk texture can be seen. It is also famous for the spot for hearing the singing of cicada (Euterpnosia chibensis) from the end of June to the beginning of August. Local citizen’s affection for their community, or love for their home district, can be felt in the harbor district, where history, culture, and the nature of the area are introduced by hand-made Japanese Cards for the Port. 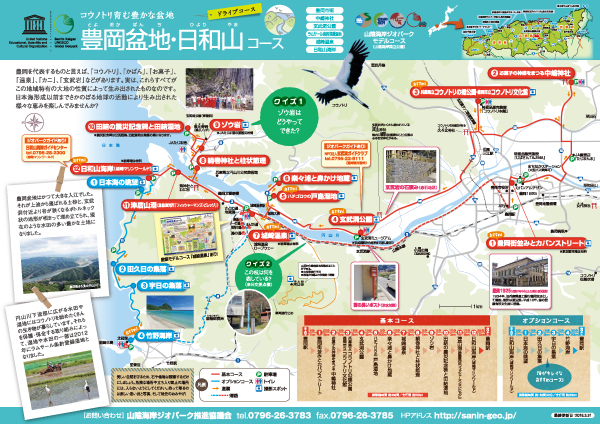 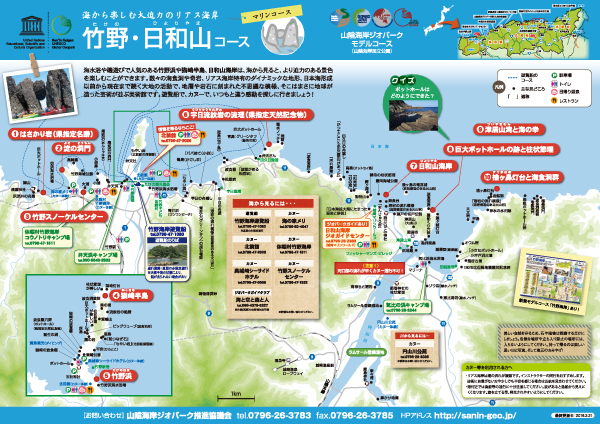