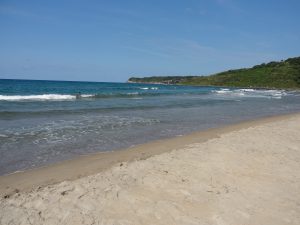 This is a Geosite consisting of a rocky coast with coastal cliffs, coastal caves, and strangely shaped rocks formed by the erosion of the lava ejected in volcanic activity after the Sea of Japan was formed (in the Pliocene Epoch), and a sandy beach of squeaking sand. In this Geosite, there are three fishing ports: Natsudomari Port where female divers catch seashells, Aoya Port which once prospered as a junction port on the Kitamaebune―a shipping route to and from the north of Japan―and Nagawase Port which was recently constructed. These three fishing ports tell you the history of how this area has been developed. 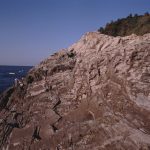 1
Nagaohana Cape
Nagaohana is a cape on the border of Ketaka Town and Aoya Town. The lava that flowed in volcanic activity in the Pliocene Epoch, the era after the Sea of Japan was formed, created a flat plateau about 80 meters above sea level. The area surrounding the cape is part of Nishi Inaba Prefectural Nature Park.
Aoya Folk Museum
0857-85-2351 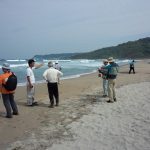 2
Idegahama Beach
The beach is known for its squeaking sand. It is said that the sand of this beach has the best squeaking sound in Japan. Nearby beaches are also known for their squeaking sand. Sand dunes spread behind the beach. These dunes are the reason that the Aoya-Kamijichi Ruins were formed.
Aoya Folk Museum
0857-85-2351 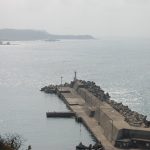 Nagaohana is a plateau formed by lava ejected from a point close to Mt. Hachibuse. Andesite rocks with plate-like columnar joints jut out into the Sea of Japan. The coastline is beautiful with rocky coasts and squeaking-sand beaches one after the other. The squeaking sand mainly consists of quartz contained in granite originating from the Chugoku Mountains. The sand squeaks only on clean beaches with clean water. Thus the squeaking sand is a barometer indicating excellent environmental conditions. 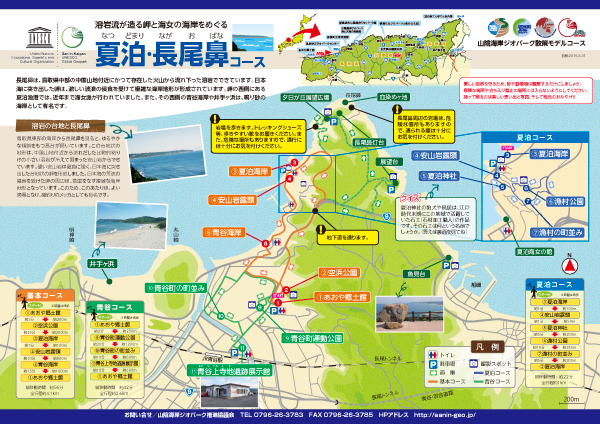 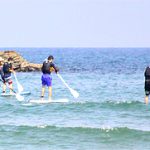