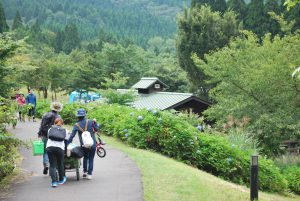 Lava and debris-avalanche sediments caused by volcanic activity after the formation of the Japanese Archipelago are widely distributed. Since lava is hard and erosion-resistant, valleys and waterfalls are formed. 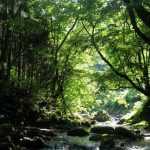 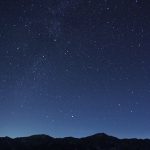 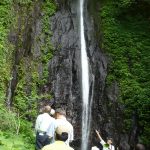 3
Niiya-hattandaki Waterfalls
A waterfall having 32m of water head falling from the lava which had flown on tuff breccia (debris-avalanche deposits).
Kami Town Ojiro Tourism Association
0796-97-2250 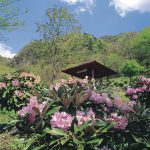 Niiya-hattandaki waterfall has 32m water head falling from the cliff, which is made of hard rocks (andesite) formed from lava erupted in the volcanic activity of almost 3 million years ago when the Japanese Archipelago was formed. From the end of April, rhododendron of light pink flowers blossom, wild chestnut and walnut trees bud fresh green leaves, wild herbs including brackens, young ferns, and udos come out around the waterfall. In autumn, you can enjoy colored leaves, and the whole waterfall freezes like an artistic ice work in winter. 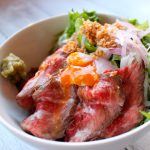