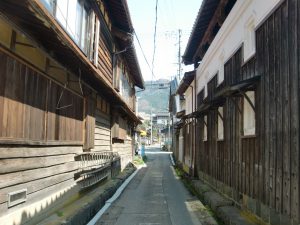 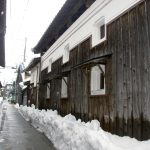 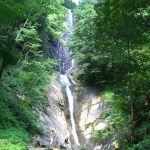 2
Saruodaki Waterfalls
The Saruodaki porphyrite vein has a length of 5.5km in a north-south direction and 500m width, which was formed by injection during the time of the formation of the Sea of Japan. The Saruodaki Waterfall is almost 60m high (two-staged waterfall having 39m upper stage and 21m lower stage) formed in the vein.
Kami Town Muraoka Tourism Association
0796-94-0123 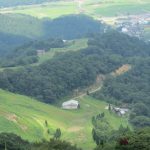 3
Mt. Sobudake
A mountain (1,074m altitude) formed of sedimentary rock during the time of formation of the Sea of Japan. A forestry road goes up to the ninth station and you can enjoy a wonderful view of Muraoka village from the observatory there. Hard volcanic rocks (Saruodaki Waterfall porphyrite dike, etc.) are distributed as veins and bedrocks, which may play a role as a backbone to generate the high mountain.
Kami Town Muraoka Tourism Association
0796-94-0123 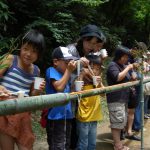 Saruodaki Waterfall is located 1km from the national road, and it takes 2-3 minutes from the parking lot. Figures of Buddha and bodhisattva seem to appear on the natural wall, so that people come to pray for a wish and give thanks for the achievement of the wish. Saruodaki Festal is held in July to provide Somen Nagashi (somen noodle catching). 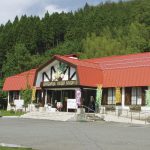